The Acropolis Museum is a modern museum in Athens. After the Acropolis itself, the museum is the most important sight of the Greek capital. Thousands of visitors come every day, including many international tourists. It is the most visited museum in Greece next to the National Museum. 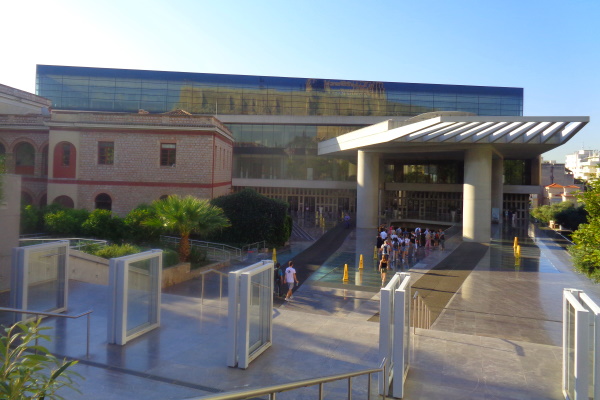 Now, about 10 years after the opening, about 5 million visitors per year come to the museum under the Acropolis Hill. In the high season, there are often 30,000 museum visitors or more per day. The queues at the cash desks can be extremely long, therefore it is better to buy the tickets online before. On the German website Getyourguide you can get the tickets: Link to the ticket page

Entrance fees to the Acropolis Museum of Athens: 10 Euro adults, children under 18 years do not pay any entrance fee, the crowd is often gigantic. It is better to buy the tickets online before (we recommend the German website Getyourguide.de). If you do not have online tickets, it is best to arrive before 9:30. After that, thousands of visitors come, the few ticket offices are overloaded, long queues. We think, for such a world-famous museum 10 Euro entrance fee is ok.

Approach Acropolis Museum : The subway station Acropolis is only 5 minutes walking distance away. We do not recommend the arrival by car due to the lack of parking places in the centre of Athens.

Only exhibits from the Athens Acropolis are on display. The modern museum was only opened in 2009. The architect was Bernard Tschumi. Antique buildings were found during construction. The excavation was integrated into the museum in a wonderful way. Almost every visitor is impressed by it. You can see the excavation for example through the glass floor on the ground floor of the museum building.

The museum has 4 floors. On the ground floor there are smaller things like vessels or pots from the Acropolis. 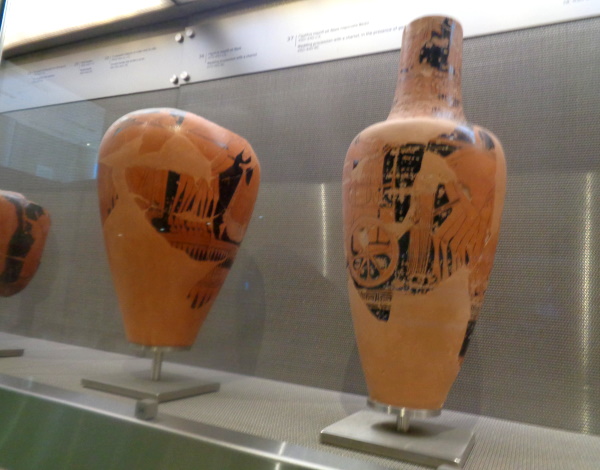 On the first floor are statues and other larger objects. We found it great that the sculptures are in the middle of the room and not on the wall. So you can see them from all sides, also from behind. There is a lot of daylight through the huge windows of the Acropolis Museum. Depending on the time of day the sun shines into the museum from different sides. Therewith, the lighting is extremely realistic, almost like being outside. Statues that are in foreign museums are reproduced in plaster in the Acropolis Museum in Athens. Thus, the museum visitor in Athens can see all known sculptures of the Acropolis.

There is no exhibition on the 2nd floor, here is a large cafe with a large terrace outside. On the top floor there is a good film about the Acropolis in a cinema, alternately in English and Greek. There is also a reproduction of the famous tile of the Acropolis. A series of pictures that once went all around the Acropolis (i.e. hundreds of meters). The real tile was stolen by the English in 1801, it is in the British Museum in London. The replica of the frieze is built up in the same large rectangle as in the original at the top of the Temple Parthenon, the main building of the Acropolis. 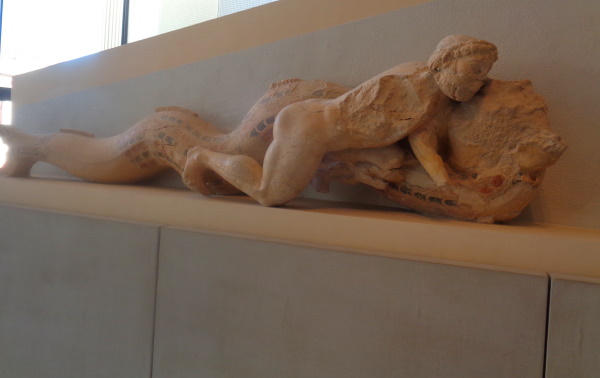 Also impressive is the Actropolis Museum itself, a really successful museum in our opinion. A big building, a total area of 25.000 m², of which a good half is exhibition space. There is a lot of space, the exhibits are much more spacious than in comparable, older museums. From some windows of the museum one has a good view up to the Acropolis (translated: upper city). The Acropolis Museum is mainly made of glass, walls and even partly floors and ceilings. The abundant daylight provides an optimal illumination of the exhibits, especially when the sun is shining, as it usually is in Athens. One of the best museum buildings we have ever seen.