Accessible by cable car, the viewpoint of Mount Lycabettus with great views of the Acropolis and the whole city of Athens. For many a highlight of an Athens trip. From nowhere you can see the big city better.

The mountain Lycabettus can be reached on foot or by funicular. The majority choose the cable car. The long ascent is extremely hard, especially in the heat of summer.  For many tourists, the 400 metres long way from the metro station to the bottom station of the cableway is already a challenge. It is a steep ascent.

If one reaches the top station with the cable car, one has to go up some stairs to the observation deck. One passes a grill-restaurant with rather high prices. One should take some water with one. Behind the view point there is a little church that can be also viewed from the inside.

Colosseum Rome Tickets you get here 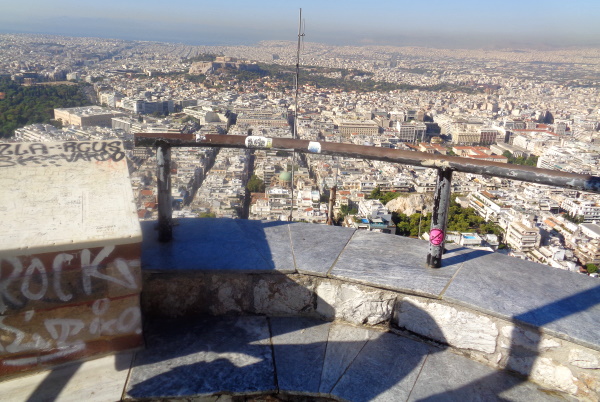 The view of Athens from Lycabettus is breathtaking. One sees concrete up to the horizon, a gigantic city with over 4 million inhabitants with suburbs. Among other things, one sees opposite the much lower hills with the Acropolis. Also the stadium of the Olympic Games in 1896 and the National Garden of Athens are very well visible. Of course, Mount Lycabettus is also an ideal place for great photos and videos.

It is best to take the metro (subway) line 3 to Evangelismos station, just one stop from the central square Syntagma (direction airport). From there walk uphill away from the wide street on the left of the park (Marasli Street). After 200 meters the street ends and you turn left. After about 100 meters you will see stairs on the right. Go up the stairs several hundred steps and you will reach the square with the valley station of the cable car to Mount Lycabettus.

The funicular leaves every 30 minutes, from the morning until late in the evening. A ticket costs 7 euros return (price of summer 2019, single ticket 5 euros).

To the lower cable car station you can also go by car. The steep ride up with the funicular on Mount Lycabettus takes only 3 minutes. In the middle of the ride, the car comes from above. At the top, there are only a few steps up to the observation deck. One can stay as long as one wants, every half an hour one can go back with the funicular.

In the restaurant at the top of the mountain Lycabettus there are some good grill dishes from the open fire, but one can also only have a coffee. The prices are higher than usual in Athens. There is also a cafe downstairs opposite the valley station of the Lycabettus cable car.

Summary: Cable car to the Lycabettus 7 Euro there and back, departure all day every full half hour from below and above. Travel time only 3-4 minutes. The best view over Athens from the viewing platform on top of the mountain Lycabettus. Take a bottle of water with you, often very hot.