The National Archaeological Museum of Athens is one of the biggest sights in Athens and is the most important museum in all of Greece besides the Acropolis Museum. In the huge museum there are more than 10,000 exhibits, from tiny earrings to statues several meters high. 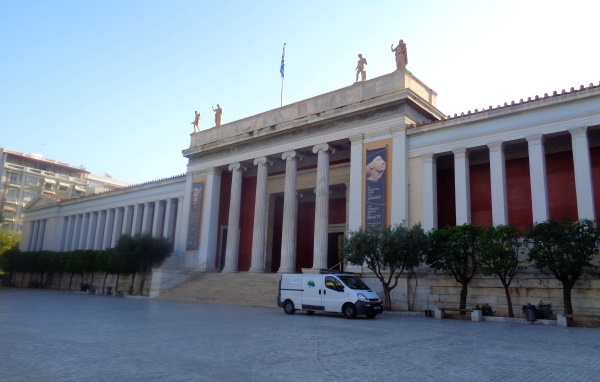 They are mainly exhibits from Greek antiquity, some are up to 7000 years old. Most of the exhibits are from the 1st millennium before Christ. They come from different sites such as the mainland, the Peloponnese and from the islands (especially Cyclades). In the past, all finds from ancient times were brought to Athens from all over Greece to the National Archaeological Museum. The museum is located about one kilometre outside of the current city centre of Athens or a few hundred metres north of the central square Omonia.

Opening hours National Archaeological Museum of Greece: Daily from 8am to 8pm (8 to 8), Tuesday shorter opening hours 12:30 to 8pm. In winter is only open until 16:30.

Entrance fees National Archaeological Museum of Athens: 10 euros for adults, children under 18 free of charge. In winter the entrance fee is only 5 euros.

How to get to the National Archaeological Museum of Athens: The best way to get there is by metro, by car it is difficult to find a parking space in the central area. The nearest metro station is Victoria (line 1). But also from Omonia one can walk to the museum in 10 minutes. Address: Patission Str. 44, Athens, just enter “National Museum Athens” in Google Maps etc.

Description of the exhibition

It is one of the most important museums for antiquity in the world. Many exhibits in the large museum are world-famous. Almost all of them come from Greek antiquity, that is from the time before Christ.

Especially important and large is the collection of sculptures, which occupies a large part of the Greek National Museum. In approximately 30 rooms on the ground floor, mainly statues are exhibited. Some of them belong to the most important antique sculptures of the world.

In the prehistoric collection one finds things from even older epochs as from the stone age and bronze age. There are also works of art, jewellery, vessels and much more from different epochs from all over Greece. Also the building of the museum with the big, classical columns at the entrance impresses many museum visitors.